Jamie Pearson is a mother of two, publishes the blog Travel Savvy Mom, and has written for National Geographic’s Intelligent Travel Blog and Fodors.com. A few years ago, when I told people I was taking my kids to Scotland for spring break, I got one of two responses: “You’re going to freeze your butts off!” (we didn’t, for the record), or “Oh, I’ve always wanted to go to Scotland!”

For such a small nation, Scotland has a lot of passionate fans. Is it the strange food, the feisty history, or the rugged characters that draw people this far north of the equator? Maybe it’s the wild mountainscapes, the lovely lochs, the picturesque pine forests and craggy castles. Or is it the whisky and the golf?

Whatever draws adults there, what appeals to younger travelers is entirely different—but equally compelling, which makes Scotland a great family destination. Based on my personal observations, here are five reasons kids love Scotland. Most adults can be trusted to act reasonably mature about kilts, or as my son likes to call them, “man skirts.” Children are under no obligation to do so, however. Also, in Scotland there always seems to be someone on hand to explain to young minds what “going regimental” means, which adds to the general hilarity. Once your kids are done laughing about the traditional Scotsman’s lack of undergarments, they’ll enjoy learning about the sporran (or, according to my son, the “hairy man purse”) and sgian–dubh (the “sock knife”). You don’t get to be as old as Scotland without racking up a few good stories about dead people. It seems like everywhere you go there are gray ladies, drowned witches, vengeful highwaymen, and grave robbers. In Edinburgh alone, there are enough ghost tours to sink a ship. If you have sensitive kids, proceed with caution – Scotland’s history has a dark side. But most kids will gobble up these ghostly tales and want more. Scotland is justifiably famous for inventing golf, but the Scots also invented a lot of other Highland Games that didn’t catch on quite as well. Most of these are displays of brute strength. In the caber toss, for example, competitors balance a 175-pound pine pole on their palms and then hurl it end over end. And in the Scottish hammer throw, men and women whirl in place before chucking a 12- to 22-pound hammer as far as they can. Highland games events also feature dancing, herding dog trials, and traditional Scottish refreshments. Irresistible! 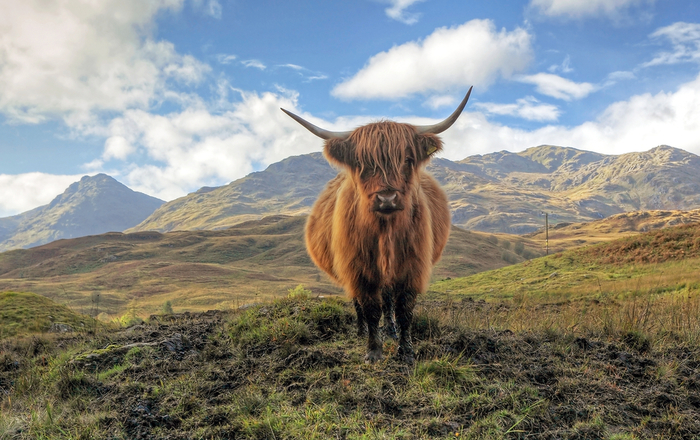 The Irish writer George Bernard Shaw once said that England and America are two countries divided by a common language. Happily, the same is true for Scotland and America. In the Scottish vernacular, Highland cattle are “hairy coos.” Anything small and annoying is a “wee beastie.” A friend is a “mucker.” An idiot is a “numpty” or a “daftie.” Even everyday words like “aye” and “nae” can be hard to understand, but kids will enjoy trying. Even though modern sonar has pretty much ruled out the possibility of an enormous but shy dino-critter Loch Ness monster, learning about the myths and legends of Nessie is big fun for kids of all ages. After viewing photos and submarines, hearing about sightings and hoaxes, and learning just what the loch’s scant food supply can (and can’t) support, cruise the loch by boat and make up your own mind.

Take your bonnie lads and lassies to Scotland with Off the Beaten Path!

From man skirts and ghost tales to muckers and monsters, Scotland’s attractions for kids are varied – and almost endless. It’s a family-friendly destination with something for everyone. Let an OBP Travel Expert design your family trip to Scotland, on an independent Private Custom Journey. You can travel at your own pace, explore your personal interests, and stay at family friendly inns. We work with local guides who will take you hiking, tell you stories, explain haggis, and fill you in on kilts. Slàinte!