Moroccan Magic: Sleeping in the Sahara

A professional writer, known for award-winning travel, food and wine and cross-cultural writing. Beebe is the author of The Spiritual Traveler Spain and Historic Walking Guides Madrid and has been published in Archaeology, Wine Enthusiast, Bark, National Geographic books, Expedition and Perceptive Travel. Restless and unable to sleep, I threw off seven camel hair blankets and pushed out of my carpet-covered canvas tent into the night. But instead of engulfing darkness at this early hour of two or three in the morning, a full moon anchored overhead, illuminating each grain of sand. I laughed. The desert was a sea of light. It was as if I had stumbled onto another planet, another world. This was the Sahara in southern Morocco on a December night, beneath a full moon. I looked around that sea of ochre-colored glitter and saw the stand of palm trees where we’d tied, fed, watered, and left our camels to rest. Mine let out an atmosphere-rending bray. A light wind swept through our little dune valley and for a long second lifted the feathery fronds of the small cluster of palm trees. How many more magical elements could possibly come together? I looked up. In spite of the moon lighting the sky, a swirl of stars had splashed across the heavens.

Morocco, and all of North Africa, is a nuanced place to be with its incredibly varied landscapes, languages, cultures, histories, prehistories, arts, and literatures.

The space between the Mediterranean Sea to the north and the Sahara to the south is both a vast sweep of dunes and desert and a landscape of mountains, gullies, rivers, and oases. Like the shifting topography of sands blown by the wind, each day in North Africa starts afresh, as if in a new place. We arrived by camel, departing from an outpost south of Erfoud. We brought only enough for our overnight, carried just enough water to drink and brush our teeth—something that struck me as a modern curiosity as I did it over the desert sands and saw the effort be slurped down quickly by the earth.

We wore every article of clothing we had, slept in well-carpeted and insulated tents under as many scratchy camel hair blankets as we could desire, and were well feted by our Berber hosts who had easily accommodated the vegetarian makeup of our small group.

Moroccans in general don’t eat meat as much as visitors think, for meat is a highly prized and expensive food. But it is almost mandatory to serve meat to a guest, reinforcing the visitor’s sense that meat is always on the menu. It is not. Many homes, especially of modest and lesser means, eat colorful and succulent vegetable dishes rich in chickpeas and eggs; meat is saved for a special day of the week, such as the Sabbath on Friday, or for feast days, of which there are many. 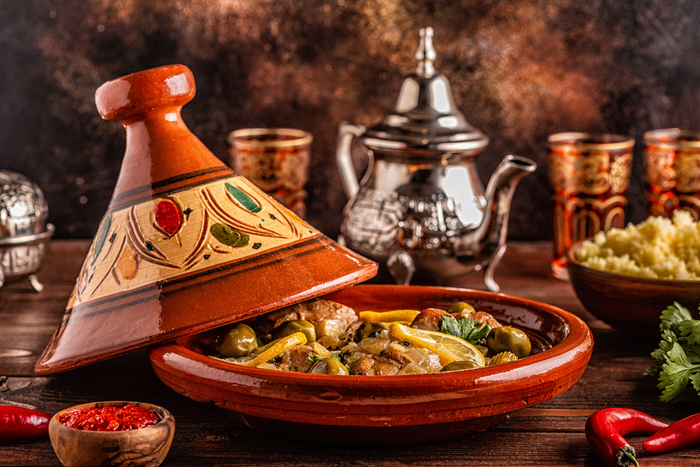 We delighted in the cumin, saffron, and red-pepper rich stew of caramelized onions with chickpeas, green olives, and carrots that topped a bed of rice. A ring of hardboiled eggs decorated the rim with their white halos around yellow yokes. It was savory and so satisfying that we all felt warm, content, and sleepy in spite of the quick drop in temperature with the setting winter sun.

I slipped heat packs into my boots and put them back on, sleeping like a cowboy who never took off his gear, my feet sticking out from my seven blankets. And I slept, until the creeping cold and that crazy moon woke me to a world sparkling from above and below, heaven and earth joining as in the mystical texts of all faiths.

This was the first time I’d spent the night in the desert. I suddenly understood why the peoples who lived here felt physical freedom translate into philosophical liberation; it’s a feeling that only the desert can give. It was an otherworldly beauty wedded to a fiercely self-sufficient way of life. The rest of the world simply did not exist. It was so free here from human-made light that even with a full moon the stars swirled low.

My camel sent another gurgling and cutting bray into the glimmering night. I retired to just inside the tent but still gazed out. I still couldn’t sleep but wanted to be outside of my camel’s view so that he would stop braying and risk waking the camp. He’d been well fed and watered and was just mooching, the only other creature awake with me, wanting to see what could come of it. I could learn to love him once I embraced his pushy character a bit more. It all came together in a warming rush—the moon, the stars, the crystal sands, that beloved feisty camel, those palms, that soft breeze—such that I entirely forgot the cold.

Somewhere in between that contentment and the first rays of the sun slipping up over the dunes from the east, I fell asleep. I had deep dreams filled with an endless and enchanted realm. Occasionally, there was a distant rumble, but the camel’s call was woven lyrically into this heaven on earth.

Sleep Under the Stars in Morocco

Do you dream of sleeping under the stars in a remote and luxurious Saharan desert camp on your own private adventure to Morocco? That unforgettable experience is part of Off the Beaten Path’s Private Custom Journey, The Magic of Morocco—a trip that connects you with local guides throughout the adventure, to lead you through city markets, take you hiking on trails in the Atlas Mountains, and escort you via camel ride to a luxurious Saharan desert camp. Oh the stars, oh the stories. Call us at 800-445-2995 to talk to a Morocco travel expert, or send us a question!