From the medinas of Marrakech to the sands of the Sahara –Morocco is wonder-full!

With Off the Beaten Path’s excellent Moroccan connections, you can navigate this complex country confidently, from dawn until dusk, around the souks in the Medina, through the Atlas Mountains, along national park trails, into the desert on the back of a camel, and up to the stars glittering over the Sahara. 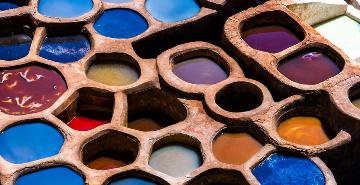 The Magic of Morocco Sitting on the top of Africa and just off the Mediterranean Sea, Morocco is a whirl of cultures and an exquisite jewel of geography. Get to know its deserts, mountains, people, souqs (open-air marketplaces)—and even its camels—on an off-the-beaten-path adventure that’s a world away, literally and figuratively.

By taking advantage of our longtime connections and experience in Morocco, you could start your private custom tour in Africa in the city of Marrakech, a cultural melting pot with roots going back almost a thousand years. One of Morocco’s four former imperial cities, Marrakech is surrounded by thick, ocher-colored walls. In “The Red City,” you’ll amble through the well-known Jemaa el-Fnaa, the busiest square in all of Africa. In this vast bazaar, acrobats, fire-eaters, dancers, musicians and mystics will encircle you as you search for handmade, African treasures through the labyrinth of vendor stalls. Pyramids of brightly colored spices, richly woven rugs and a thousand other exotic goods will call for your attention and envelop you in local life and vitality.

In Marrakech, you can explore the marble-and-gold Saadian Tombs dating from the late 1500s, which contain the remains of a sultan’s family; the 1860s-era Palais de la Bahia; and the Koutoubia Mosque, the city’s largest. We’ll set you up with a private guide who will take you on a hike in the rugged and craggy Atlas Mountains—which separate the Mediterranean Sea from the Sahara Desert—on paths known only to locals. In Toubkal National Park, home to the highest mountain in North Africa, we’ll arrange for your stay in a classic casbah.

Take in a second imperial city during your African adventure by traveling to Fez, the spiritual heart of Morocco. In his 1823 poem Don Juan, Lord Byron wrote that Fez is “Where all is Eden, or a wilderness.” Today, Fez is still full of that romance. In Old Medina, the city’s ancient walled quarter, you can watch the daily procession of mourners entering the tomb of Fez’s founder, Moulay Idriss II; pause to watch a leather tanner; and touch the ornate carvings and mosaics covering almost every surface around you.

Then leave the cities behind and travel by jeep through the sand and dried-out lakes to the remote and wild Erg Chigaga Dunes. Your African adventure vacation ratchets up another notch when you transfer to the back of a camel for the last stretch of your journey to your deluxe Sahara Desert camp. Although remote, it is luxurious: your tent will be equipped with “wall-to-wall” rugs, solar-powered lighting and handcrafted furniture, all set in a sea of undulating dunes.

As dawn stretches it fingers across the Sahara sands, greet each day by listening to the desert stir to wakefulness. Your Berber hosts will fill you up with authentic foods and atai, a black or green tea mixed with mint leaves and sugar. In the evenings, as you lay your head down for the night, you’ll realize that the “whirl” of Morocco you now feel is the result of the rhythms still playing inside your head from the traditional musical performances you just enjoyed with your Berber hosts. The “jewels” of geography you now see will be in the dark and starry, Sahara sky.