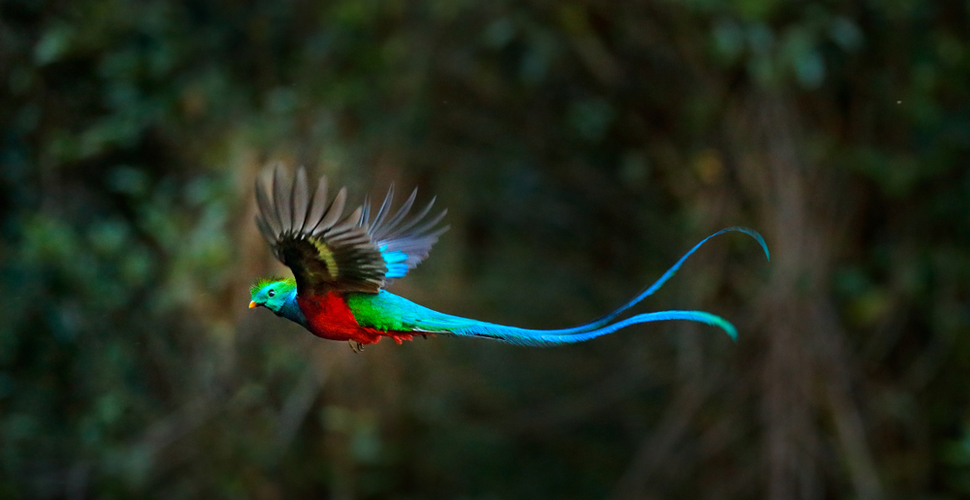 Peeking through the lens, I was six years old again. There was the bird I had been yearning to see, a quetzal as resplendent as I had read about—a vivid dream from my distant past. He sat on a tree branch, preening his feathers, cocking his head and looking around with curious black eyes as his dazzling blue-green plumage reflected the light of the rising sun. I had barely a few moments to admire him. Then he took off into the rain forest canopy, vanishing like the fleeting moments of childhood.

As a child, I spent hours reading children’s encyclopedias that explained the wonders of our world in colorful pictures and easy-to-read text. One bird in particular jumped out: It was dressed in crimson, sapphire-blue and emerald-green, with a regal feather-fluffed crown on its head and a tail adorned with feathers that trailed across two pages. The quetzal was breathtaking to behold, even in print. And in life? Well, the bird was once worshipped by the ancient Mayans and Aztecs for its radiant beauty.

Twenty-five years later, I was walking through the cloud forests of Monteverde in Costa Rica, hoping to make my lifelong dream of seeing a real quetzal come true.

By my side was Ricardo Guindon, whom I had met just that morning. Ricardo was a native of Monteverde, and had more than 30 years of birdwatching and guiding experience. He was born to North American Quaker parents who moved from the United States to Costa Rica and settled near Monteverde in the 1950s. When he had heard my desire to see this rare bird, Ricardo had set my expectations gently: “Let’s be realistic. We have a 50-50 chance of seeing a quetzal. But don’t worry. There are a lot of other amazing things to see in Monteverde.”

The quetzal might be conspicuously flamboyant, but it was not going to be easy to spot amongst the dense branches and leaves of the rainforest. Venturing a few steps down the trail behind Ricardo, I silently willed the quetzals to show themselves. We continued walking quietly for the next 10 minutes. Suddenly, a melodious but dolorous two-tone birdsong resounded through the rainforest canopy. Ricardo froze in his tracks, and so did I.

“Is that a quetzal?” I asked, breathless.

Nodding his head, Ricardo looked at me with eyes mirroring my excitement. “Probably a young male,” he whispered while peering at the branches, trying to spot the bird. Glimpsing the telltale flash of vermillion and jade amongst the trees, he promptly set up the spotting scope and offered it to me. My childhood dream came true—in a matter of spellbound moments—and then, in a flash, the bird was once again lost in the rain forest canopy.

“I can’t believe that the first bird we heard and saw was a quetzal,” Ricardo said, shaking his head in astonishment. “That was incredibly lucky.”

But our luck was only beginning: Later that morning, we saw another of these splendid birds. The second quetzal flew from branch to branch, its fern-green feathered tail trailing behind gracefully.

“The quetzal loves to eat avocados,” said Ricardo. “The birds are most active at dawn, since it’s the best time for feeding and hunting. After they eat their fill, they just sit in one place, still as a statue. It’s harder to spot them then,” he explained.

As we walked, I realized that being a guide in the rain forest could be stressful. Enthusiastic and well-meaning travelers came from all over the world, aspiring to see the bird or animal they had dreamed about. This put a lot of pressure on the guides. Now that we had seen the quetzal and achieved our “species goals,” I could sense Ricardo’s mood had shifted. He was more cheerful, more relaxed.

Observing the birds in all their grandeur in their natural habitat filled my heart with joy. Wondering if Ricardo felt like this every time he saw a quetzal, I asked if it was his favorite bird. He smiled before confessing.

“No. I admire the flashy quetzal since it brings so many people to Monteverde. But I personally prefer a small, brown thrush called the yigüirro.”

“It sings beautifully at the onset of the rainy season.”

After a couple of hours, the stillness of early dawn had given way to the bustling activity of humans on the trails. We stumbled across several big groups of visitors seeking the quetzal. Somebody quipped about Monteverde becoming a “crowd forest.”

Ricardo turned to me with a grin. “Want to hike my favorite trail?”

Eager to get away from the commotion, we headed up the lesser-known Chomogo trail that would lead us to the tranquil upper reaches of the forest. Cloud forests are shrouded in dense, low-lying fog, but as we climbed up along the ridgeline, the haze thinned. Views began to open up all around us, allowing us to see surrounding trees clearly while wispy veils of vapor wafted gracefully through the valleys below us.

Hiking in the hushed heights of the cloud forest, we heard the birds before we saw them. A tanager announced itself with a rustle and chirp before popping up on a nearby branch. Bobbing its head and looking around warily in its role as sentinel, it checked its surroundings and signaled to the other birds in its mixed feeding flock to follow.

Suddenly, dozens of colorful native birds descended upon us, flocking through bushes, feeding on fruits, seeds, and insects before moving on as quickly as they had arrived. I stood awe-struck as Ricardo spoke softly into his tape recorder.

“I have been collecting data on all the endemic species of birds in Monteverde for the past 20 years!” he said proudly. “I track their habits, movements, and populations to ensure the rain forest is healthy and flourishing.”

We continued hiking uphill for a couple of hours before heading back down Chomogo trail, where we stopped at a fork leading deeper into the rain forest. Glancing toward the trail that diverged, I noticed the name on the sign read “Wilford Guindon Trail.”

“Isn’t your last name Guindon?” I asked Ricardo, pointing toward the trailhead.

“Wilford Guindon is my father.”

“There’s a trail in the cloud forest named after your father?”

“Yes, my father was one of the founding members of this preserve in the 1970s,” he said matter-of-factly. “Down that trail, there’s a hanging bridge in the cloud forest named after him.”

What serendipity! Here I was, on a birdwatching tour in Monteverde’s precious cloud forest, and my guide’s father happened to be one of the people who had the prescience to create this very reserve!

“He must be very proud of you,” I said, wonderstruck.

Ricardo told me that yes, his father was proud of him. And Ricardo was also proud of his father: Later in the week, they would meet for a celebration of Wilford’s life and contributions to Monteverde.

“My father used to love hiking these trails,” Ricardo said. “He’s in his 80s and too old now, but he still loves the jungle.”

Birding with the Best As we continued hiking, several guides stopped to chat with Ricardo. He spoke flawlessly in English and Spanish with tourists and locals alike. They presented him with photos of birds and recordings of birdsong. Every time, Ricardo nodded his head with a smile before identifying the bird.

Growing up with the rain forest as his playground, Ricardo knew the forest intimately and considered himself incredibly lucky to be surrounded by such natural riches.

“I used to swing from the tree branches and pretend I was Tarzan!” he admitted with a laugh.

After pursing higher education in the United States, Ricardo returned to Costa Rica. He aspired to follow in his father’s footsteps—to safeguard one of the country’s most precious, biodiverse ecosystems. What makes Monteverde unique is that it is home to such a variety of life. It is home to hundreds of species of mammals, birds, amphibians, and reptiles. It has six species of the cat family that are native to Costa Rica—jaguar, ocelot, puma, oncilla, margay and jaguarundi—and several endangered birds, like the three-wattled bellbird, and of course, the quetzal.

“How many quetzals are there in the cloud forest?” I asked, imagining a multitude soaring through the canopy.

“Only about a 100 nesting pairs,” said Ricardo. “But we don’t know the latest count, and that is where I hope my observations and data will help.” Even on his days off, Ricardo spent hours transcribing all his observations. It was tedious but important work. “I hope one day all my efforts are useful to a scientist or researcher,” he said, a wishful fire in his eyes.

“There’s no doubt that your work will be invaluable,” I said.

Ricardo told me that when he was growing up, local families were still clearing the cloud forest to make space for homesteading and cultivation. Although parts of the pristine jungles were protected under the privately owned Monteverde Cloud Forest Biological Reserve, surrounding areas were open to logging and development.

Ricardo had always wanted to study birds and wildlife and put that knowledge to good use in his country. “I never thought I would be able to pursue my interests like guiding, birding, and conservation as a career,” he said. “This is a dream come true.”

Standing on the trail, surrounded by trills and chirps, I realized that just as Ricardo had played a part in my childhood dreams, I was also playing a part in his.

Stirring from my reverie, I turned to see Ricardo whispering into his tape recorder. Ready for your own Costa Rican Quest?

Off the Beaten Path has been sending serious and beginning birders, wildlife watchers, and curious travelers to Costa Rica for years, on guided small-group trips and independent custom journeys. See the itineraries for two of our custom trips, Iconic Costa Rica and Costa Rica Retreat, which you can take as-is, or tweak and adjust to suit your specific needs and interests. Or contact an OBP Travel Advisor to start planning your own quest from scratch, whatever that might be—wildlife watching, river rafting, birding, walking in the tree canopy on hanging bridges, or whatever you dream.