On the island of Vis

Hiking along the Dalmatian coast

Explore historic, beautiful Croatia on this adventure from Istria peninsula in the north, south to the dramatic Dalmatian Coast. Your journey is a superb off the beaten path blend of nature, culture, and connection—with a culinary thread running through it! For example, you’ll be treated to an oyster and mussel “dégustation” (mindful, sensory food tasting), truffle hunting and tasting, and a traditional “under the bell” peka meal, all with gracious and convivial local hosts.

To whet your appetite, you’ll hike through beech forests and past turquoise lakes, explore UNESCO World Heritage sites and nature reserves, and visit notable landmarks including hilltop villages with WWII island fortifications and the famous Blue Grotto, a glowing blue sea cave you approach by small boat. Fill your senses to the brim on this captivating Croatian adventure!


*Price per person based on double occupancy. Trip price includes all lodging, meals, ground transportation, guide services and activities as described in this itinerary.

Do you want to customize this trip?

We customize trips all the time! Email us today: travel@offthebeatenpath.com. 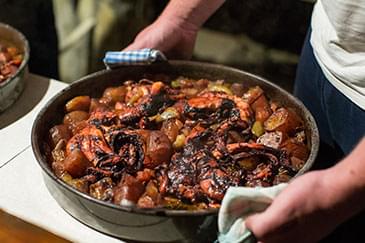 Pricing detailed for this Small Group Adventure is based upon double occupancy. Additional charges for single travelers and any on-trip airfare required for the trip apply. A booking deposit is required to reserve your space. Small Group Adventure pricing includes all lodging, meals (unless otherwise noted), activities, baggage handling, transportation, and guide service. Not included are travel costs to/from gateway cities, guide gratuities, and personal incidentals including, but not limited to, trip cancellation/interruption insurance, alcoholic beverages, and laundry service. Travel with Off the Beaten Path requires agreement to our standard Terms & Conditions.

Your hikes are easy to moderate, under 6 miles per day, sometimes over uneven terrain. Walking in the towns and villages also often involves navigating over uneven stone streets or through ancient ruins. Expect multiple ferry rides, and a boat ride to Biševo island across waters that can be choppy at times.

Make this trip all yours!

Most all of our Small Group Adventures can be made private to just your traveling troupe. Just give us a call at (800) 445-2995 and tell us that you would like to “make it private”!

Generally, there are two ways to make a small group adventure private. First, you could capture one of our published departure dates for just your group. In order to achieve this, we have to have sufficient space available to create a separate private trip. Second, we could take the details of this itinerary and fashion it for just your group on dates of your choosing. For this, too, we just need to review your interest, group size, and preferred timing in order to create the trip.

In all cases, the process begins with a phone call so give us a ring at (800) 445-2995 and after just a few minutes gathering information, we can set to the task of making your trip a reality!

Arrive at the Pula airport by 2, and head off with your Trip Leader to Pula’s old town. The Roman Amphitheater here is considered to be among the best preserved in the world. We’ll settle into our gracious hotel in Rovinj this afternoon.

This morning we explore Rovinj, one of the most beautiful towns on the Mediterranean. Walk the stone streets with their old, closely built houses, and appreciate the Renaissance architecture and sea views. Later we walk Lim Fjord Nature Reserve, a lush and diverse marine estuary home to a range of birds and wildlife. Afterward we’re treated to a delightful dégustation (mindfully savored tasting) of mussels and oysters.

After time this morning in the 14thcentury Venetian village of Groznjan, we hike along the Parenzana trail, once a narrow-gauge railway. Stone viaduct arches still bridge the canyons of thunderous small rivers. After our walk and a wine tasting, we try our hands at truffle hunting. Even if we come up empty, our friendly hosts serve up truffle flavored honey, pate, and other delicacies. Our day ends in Buzet with a lovely dinner.

We stop at the tiny medieval town of Hum, then head to UNESCO World Heritage Plitvice Lakes National Park to explore. The park is famous for its spectacular landscape of colorful lakes linked by cascading falls and travertine pools. At the end of the day we settle into memorable luxury accommodations in the heart of the park.

Today we visit Paklenica National Park, part of a UNESCO World Biosphere Reserve, some of most pristine scenery in the Mediterranean. There are several wonderful hikes through beach and black pine forests to choose from, and we enjoy lunch in a tiny mountain village. Next stop, Trogir, a UNESCO World Heritage Site, known as the Little Venice of Dalmatia, and sometimes called a city-museum because of its rich cultural heritage.

We return to Split for a morning walking tour that takes us inside Diocletian's Palace one of the most imposing Roman ruins in existence. Later we board a ferry to Vis island, inhabited since the Neolithic period. Vis has two towns, Komiza and Vis, located on opposite sides of the island. Today is all about getting to know Vis town and relaxing on the beach. Dinner tonight is in a traditional Dalmatian restaurant.

After breakfast we explore the island’s interior and take a short walk to the summit of Mount Hum, highest point on the island. Former Yugoslavian president Josip Tito used a cave on this mountain as his headquarters during WWII, and we’ll get to see it on a walking tour. There was a huge base for land-sea missiles at Stupišće point near Komiža, with impressive tunnels and a bunker complex on alert in case of invasion. We enjoy dinner tonight in a traditional restaurant.

This morning we explore tiny Biševo island, situated on the ancient sailing passage known as “Diomedes’ route.“ Over centuries, the few residents have covered the landscape with renowned vineyards. Perhaps the island’s most famous feature is the Blue Grotto, a sea cave that fills with mesmerizing blue light at certain times of day. We head back to Vis after visiting the Blue Grotto, and a traditional Peka, or “under the bell” meal tonight.

All too soon, it seems, we catch the ferry back to Split and transfer to the airport for departures home. 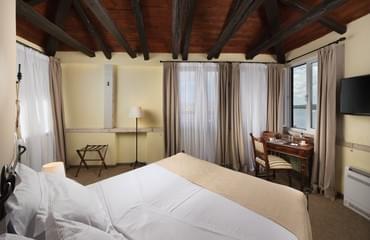 Held in the embrace of centuries-old stone walls, this boutique hotel is nestled in the heart of Rovinj’s Old Town. You’ll love the Secret Garden. 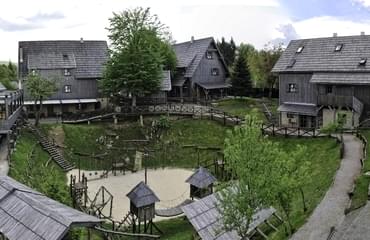 Located in the heart of Croatia’s oldest national park, this recently built lodge earns the “ethno” in its name in its respect and consideration for natural and cultural tradition. 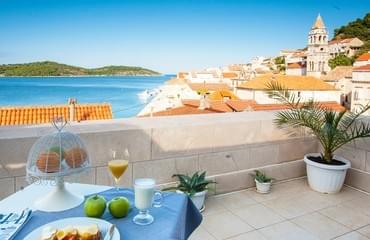 Stylish rooms, a garden courtyard, and warm hospitality greet you at this intimate, idyllic island hotel, a short stroll from the sea.