Yosemite Valley was protected as a national parkland in 1864, eight years before Yellowstone became the first “official” national park. Yosemite is an all-season park, and it is dynamic! Springtime showcases the park’s celebrated waterfalls and sweet scent of the giant redwood forest. Summer lures hikers to flower-filled Tuolumne Meadows and to watch climbers make their way up “El Cap” in Yosemite Valley. Fall is a photographer’s dream with clear skies, reflections on glassy lakes, and changing leaves. And winter invites you to ski and snowshoe in not-too-cold temperatures with few other people around. 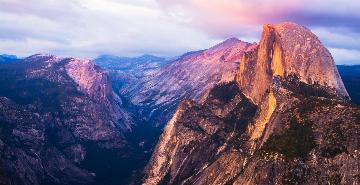 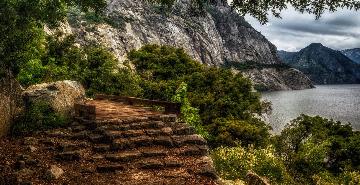 Yosemite is one of those pilgrimage parks for people who love nature and the outdoors. There’s so much to see here, so much to learn and experience. Our guided group trips are led by naturalist guides who know the park inside and out. Off the Beaten Path group tours are small and nimble enough to keep you away from the crowds as much as possible, yet still get you to the important spots like the Mariposa Grove of giant sequoias and Yosemite Falls. Our private custom trips are equally nimble because you set the pace and the tone. Are you ready to introduce your family to Yosemite? Would you like to hike in the footsteps of John Muir? Do you just want a national park vacation that is more interesting than the normal interpretation of a national park vacation? If so, we think you’re a perfect candidate for one of our Yosemite small group trips or private custom journeys.

To get you thinking, here are some travel tips, interesting facts, and suggestions for things to do when you visit Yosemite:

Which Way To Go?

There are several areas to visit in the park. Yosemite Valley is world famous for its impressive waterfalls, meadows, cliffs, and unusual rock formations, and is accessible by car year-round. Mariposa Grove of Giant Sequoias (near the South Entrance) is the largest stand of giant sequoias (also known as Sierra redwoods or big trees) in Yosemite. The road to the Mariposa Grove is not plowed in winter and is often closed November through March. Wawona is the home to the historic Wawona Hotel (now called Big Trees Lodge), dating from the late nineteenth century. The Pioneer Yosemite History Center, a collection of historic buildings, is located just over the covered bridge from the hotel. Wawona is accessible by car year-round. Glacier Point (30 miles and one hour from Yosemite Valley) offers a gorgeous view of Yosemite Valley. The road is closed from November through early May or late June, depending on winter snowfall. Crane Flat (16 miles from Yosemite Valley) is a pleasant forest and meadow area, accessible by car year-round. Tioga Road and Tuolumne Meadows. The Tioga Road (Highway 120 East) offers a 39-mile scenic drive between Crane Flat and Tuolumne Meadows. There are many turnouts and the road is generally open to vehicles from spring through sometime in November. Tuolumne Meadows is a large, open, sub-alpine meadow graced by the winding Tuolumne River and surrounded by majestic peaks and domes. From November through spring, the area is only accessible by cross-country skis or snowshoes. Hetch Hetchy is a lesser known twin to Yosemite Valley.  The road to Hetch Hetchy is open year-round during daylight hours, and closes periodically due to snow in winter and spring.

Where to go hiking in Yosemite? The possibilities are delectable. Almost 95 percent of the roughly Rhode Island-sized park is considered wilderness, and that wilderness holds over eight-hundred miles of trails. Here are some of our favorites:

Yosemite is also known for its waterfalls, which launch themselves from the park’s sheer granite cliffs in a variety of sizes and shapes—tall, wide, thundering, misty, and wispy! Keep in mind that the waterfalls are most impressive in spring and early summer and become less so as the summer goes on.